Oh, there are sooooo many places to go if you're bored or avoiding a mundane task.

The newest little weirdo site: celebrities eating dot com! A tidbit from that site below. 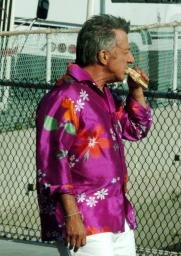 In other news, a man was detained from his flight by British anti-terrorism authorities because he was singing! Was he really that bad? Did they fear for the sanity of his cabinmates? Were they taking him to a secret location where William Hung is waiting to have a sing-off? And, oddly, this is not the first time the Clash have been involved in a situation like this.

Stubbing your toes on a frequent basis as you head to the bathroom at night? Stub no more!

Learn how to make swell cocktails from Peeps!

Bad song in my head today, thanks to the hold music at my doctors office: ABC's (God, remember them?) Be Near Me. A crap song of infinite proportions. The lyrics are so abyssmal, I expect this song to be covered any second now.

The message is perfectly simple
The meaning is clear
Don't ever stray too far
And don't dissappear
Ever had the feeling, almost broke in two?
Never had that feeling like you do, You do?
All my dreams came true last night
All my hopes and fears
All my dreams came true once more
In tears, in tears
Be near me, be near, be near...
Never had that feeling until I first met you
Never felt like kneeling. Now I do. Yes I do.
Be near me, be near
What's your reputation? Ecstasy!
What's your destination? Next to me! 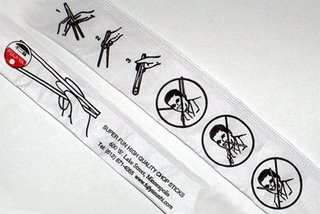 Let's finish with a nonsensical photo!

WARNING: Content produced by energy drink and granola bars containing almonds. Not repsonsible for furrowed brows, slapped foreheads or slack jaws. Spelling is a privilege, not a right.
Posted by Jen Jordan at 12:18 PM

Evil Jen. I forgot all about ABC, and it wasn't easy. Now, need music...