I Was A Big Bad

You came in with the garden refuse from my little deck and thawed, all unbeknownst to me. When you emerged from the garbage bag, in all your very large, winged glory, you scared me.

I had to set upon you. You couldn't over winter with me. And I couldn't set you free.


You will know go to you grave with the left over spaghetti. A bad end.

I shall set up a small shrine to you and honor your brethren. "Talking about myself is revolting to me. It makes me ill for days to talk about myself. For years no one paid any attention to me, no one wanted to know a thing about me. Now, because I’ve been in a picture, I’m expected to answer any and all personal questions. I’m just not doing it." — Katharine Hepburn
Posted by Jen Jordan at 9:57 PM No comments: Links to this post

The Shadow In Matter

“We are hyperspatial objects of some sort that cast a shadow onto matter. The shadow in matter is our physical organism.”
Posted by Jen Jordan at 10:05 PM 1 comment: Links to this post

What it can mean to be a girl from Wisconsin

Posted by Jen Jordan at 9:51 PM No comments: Links to this post

Alfred always became inflamed at the sight of steaming radiator.

“The artist must possess the courageous soul that dares and defies.”
Posted by Jen Jordan at 8:24 AM No comments: Links to this post 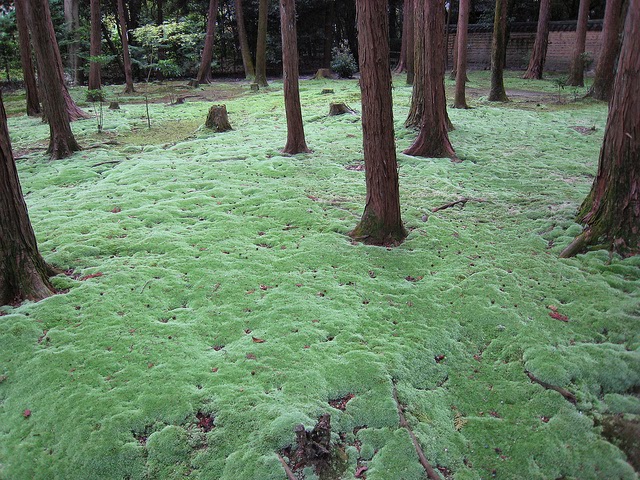 Path leading to Ganjin’s grave at Tōshōdai-ji in Nara, Japan.

Posted by Jen Jordan at 6:58 AM No comments: Links to this post

Good morning.
Posted by Jen Jordan at 6:24 AM No comments: Links to this post

“Nine times out of ten, talking is a way of avoiding doing things.” 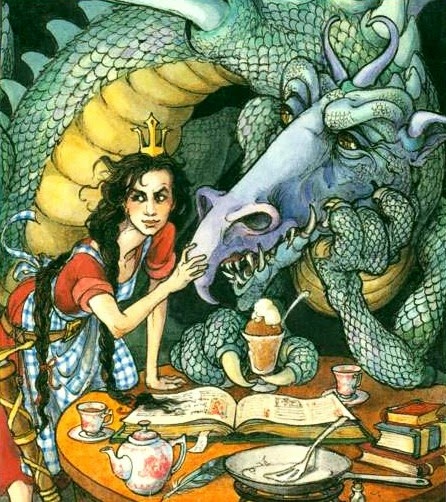 “Kazul’s not my dragon.” Cimorene said sharply. “I’m her princess. You’ll never have any luck dealing with dragons if you don’t get these things straight.”

Posted by Jen Jordan at 12:38 PM No comments: Links to this post

Suit of One Color

Karl Stefanovic revealed that (as a comment on sexism in the media) he has been wearing the same suit on air every day for a year and NO ONE noticed.

After female co-hosts were constantly criticized about what they wore, he began his one suit marathon to see if the same would happen to him.

"No one has noticed; no one gives a shit. But women, they wear the wrong colour and they get pulled up. They say the wrong thing and there’s thousands of tweets written about them. Women are judged much more harshly and keenly for what they do, what they say and what they wear… I’ve worn the same suit on air for a year - except for a couple of times because of circumstance - to make a point. I’m judged on my interviews, my appalling sense of humour - on how I do my job, basically. Whereas women are quite often judged on what they’re wearing on how their hair is." -Karl Stefanovic
Posted by Jen Jordan at 2:49 AM No comments: Links to this post

Curves are so emotional. (Piet Mondrian) 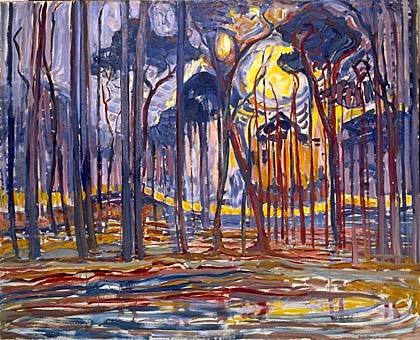 Recently re-introduced to Piet Mondrian's naturalism phase, followed by the move into the landscapes and luminsm, the lush yet stark color is almost intoxicating.

The man (born in the Netherlands) joins other Dutch painters to be stared at for hours. But all previous for me had been realists that would capture me with a dew drop on the petal of one flower amongst so many wondrous things. There are a few at the Milwaukee Art Museum that I could cram my face so near that I could (thank the gods) see the brush strokes.


"Pieter Cornelis Mondrian was born on March 7th 1872 in Amersvoort in central Holland and lived there for the first eight years of his life. He was the second child of four, with two brothers and one sister. His father Pieter Cornelis Sr. was headmaster of an elementary school, a gifted draftsman and amateur artist. Uncle Frits Mondrian was a self-taught painter and commercially successful, even the Russian court bought his work. As Piet Jr. progressed towards abstract art, he came into conflict with uncle Frits, which seems to have had something to do with Piet Mondrian signing his paintings with "Piet Mondrian" (instead of Mondriaan) from 1912 on."*

"In 1908 Mondrian became deeply involved in the latest developments in art, and in the course of the next 10 years or so he developed with astonishing rapidity through a succession of styles. He began to use pure, glowing colors and expressive brushwork under the influence of pointillism and Fauvism in pictures which are almost like those of Vincent Van Gogh in their vivid colors and intensity of expression. Motifs such as church towers and windmills were painted in a blaze of color with staccato, pointillist brushstrokes. But Mondrian soon turned to a more monumental and simplified treatment in which the motif was depicted close up, in isolation, dominating the picture area symmetrically, and the pointillist brushstrokes were replaced by large unmodulated areas of color." ** 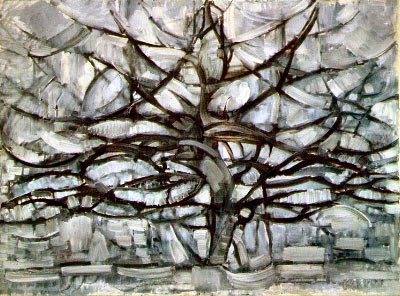 His eventual move to Paris began his move from naturalism to toward Cubism which lead to his own Neoplasticism (de Stijl).

From the Red Tree to the Gray Tree, the change in styles is exuberant and astonishing.

"While Mondrian was visiting home in 1914, World War I began, forcing him to remain in The Netherlands for the duration of the conflict. During this period, he stayed at the Laren artist's colony, there meeting Bart van der Leck and Theo van Doesburg, who were both undergoing their own personal journeys toward Abstraction. Van der Leck's use of only primary colors in his art greatly influenced Mondrian. After a meeting with Van der Leck in 1916, Mondrian wrote, "My technique which was more or less Cubist, and therefore more or less pictorial, came under the influence of his precise method." *** Van Doesburg founded a magazine called "De Stijl" (The Style) for which Piet Mondrian wrote a few articles. 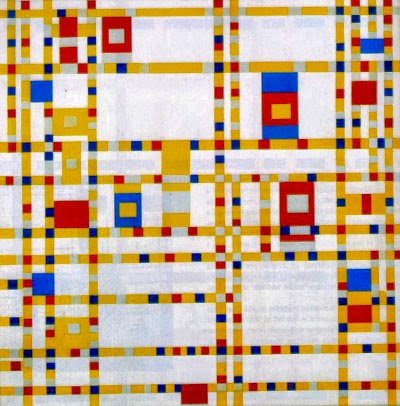 "They were of the opinion that artists, architects and sculptors should work together to create a new society that would be in tune with "the laws of the universe". The art that went with it should be clear in form and spiritual, as opposed to earthly. Natural forms were earthly, straight lines and angles spiritual. Thus "it would not be impossible to create a paradise on Earth", they said. Now De Stijl is known as an art movement, almost synonymous with the red, yellow and blue neo-plasticism paintings of Piet Mondrian." *

And thus were created all the paintings that are now synonymous with Mondrian.

*** from ye olde Wikipedia
Posted by Jen Jordan at 1:55 AM No comments: Links to this post