No Longer Looming and Dripping Sweat on the Front Row 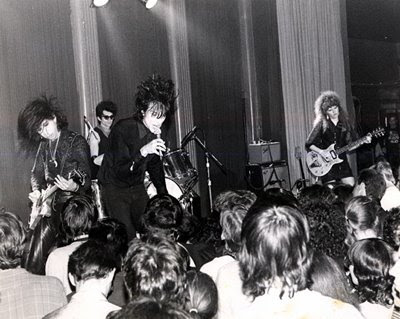 That's my strongest memory right after the fear the Lux would topple the stack of PA's done on us after he was down tying his underwear back together. My sister and I crammed up to the front of the stage for the Cramps show we saw and Lux dripped from the moment he slunk on stage. And he tore that place apart.

Oh, Gawd I love "Human Fly" and "The Garbageman." But my favorite?

For Immediate Release via The Daily Swarm:
February 4, 2009

Lux Interior, lead singer of The Cramps, passed away this morning due to an existing heart condition at Glendale Memorial Hospital in Glendale, California at 4:30 AM PST today. Lux has been an inspiration and influence to millions of artists and fans around the world. He and wife Poison Ivy’s contributions with The Cramps have had an immeasurable impact on modern music.

The Cramps emerged from the original New York punk scene of CBGB and Max’s Kansas City, with a singular sound and iconography. Their distinct take on rockabilly and surf along with their midnight movie imagery reminded us all just how exciting, dangerous, vital and sexy rock and roll should be and has spawned entire subcultures. Lux was a fearless frontman who transformed every stage he stepped on into a place of passion, abandon, and true freedom. He is a rare icon who will be missed dearly.

The family requests that you respect their privacy during this difficult time.
Posted by Jen Jordan at 12:14 AM

Goo Goo Muck, Can Your Pussy Do The Dog, on and on and on.