If I don't terrorize, I'm not Pop. 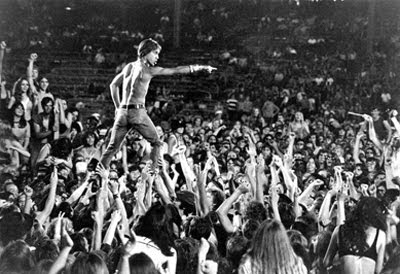 Iggy Pop, whom many think showed really start to wear a shirt, has vowed to quit crowd surfing.

After his signature stage dive in Carnegie Hall in March, the crowd parted instead of forming the oft seen human floor. Pop landed flat on the very flat, hard floor instead.
"When I landed it hurt and I made a mental note that Carnegie Hall would be a good place for my last stage dive. The audience were just like, 'What are you doing?' "
Posted by Jen Jordan at 9:14 PM

Wow, put me down for his wearing a shirt. And a ski mask. Still, hearing an Iggy Pop song one day is on my list of things to do before I die. It's a very long list.

I have to admit I don't like looking at him without a shirt, but not giving a fuck about what others think is the truly punk thing to do. And that his skin is so loose that even if one did try to catch him when he stage dives he might slip right out