"I am a kind of paranoiac in reverse. I suspect people of plotting to make me happy." 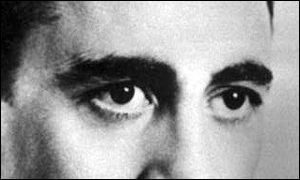 So says the mythic recluse, J. D. Salinger. On another Salinger kick, I skipped into a site chock full of under published works (thanks to The Wit of the Staircase)and was thrilled to see a memoir by his daughter. Dead Caulfield's fills it's cyber pages with all things be-Holden and was deeply amused by Dumbledore's death in the style of The Catcher in the Rye.

From The American Society of Authors and Writers:

In 1999, rumors circulated that three of Salinger's neighbors who had spent time in his home had seen a bank vault in which the author claimed to have placed "15 or 16" of his completed novels.

All are presumably about the Glass Family. If it's true that he has written these other books, the question of the day is what will happen to them after the author's death? His friends believe that he will either destroy them or authorize their publication, which would make for one of the most enlightening posthumous collections ever.

Meanwhile, the author--who leads an ascetic life--refers to himself as a "failed Zen Buddhist," walks about in a blue mechanic's uniform, and, when he goes to local restaurants, eats in the kitchen to avoid people.
Posted by Jen Jordan at 11:25 PM

Weird synchronicity -- I was just having this conversation over the weekend, about what happens to Salinger's manuscripts when he dies. Thanks for the links!

He's giving them to Joyce Maynard...OK, maybe not.

Okay, that spoiled Book 6 for me.

Have you seen the new India search engine
www.ByIndia.com they added all the cool features of popular productslike MySpace,YouTube, Ebay,craigslist,etc.all for free to use and specifically for India.Anyone else try this yet? ByIndia.com First to Blend Search,Social Network,Video Sharing and Auctions Into One Seamless Product for Indian Internet Users.