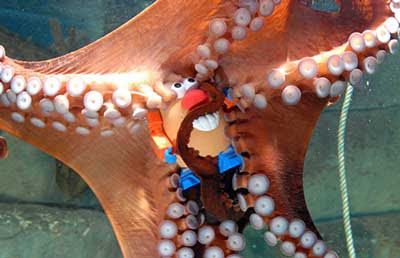 Louis the octopus is enamored.

He's in love and he will let know separate him from the the object of his affection: Mr Potato Head.

The giant Pacific octopus' standing on the Nice List inspired Santa to leave the toy for him under his coral Christmas tree. And Louis has learned to retrieve food hidden in a secret box at the back of it because he is just that damn smart a cephalopod.

He loves his Mr Potato Head so very much that he fights off any aquarium staff that try to take his beloved spud from him and plays with it for hours at a time.
Posted by Jen Jordan at 11:06 AM