"I'm kind of afraid for the grandkids. I had to sneak down there at dark and get my tractor out of the barn." 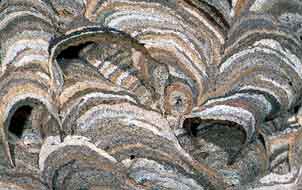 Multiple queens are forcing innocent worker yellow jackets to add on to the paper palaces so the queens will be in separate throne rooms.

At one site in Barbour County, a nest was as large as a Volkswagen Beetle and had to be removed in sections.

Bug man Dr. Charles Ray, from the Alabama Cooperative Extension System in Auburn, said he's aware of 16 nests in the area that he would describe as "super-sized" McNests.

The largest wasp abode inspected this year was in 1955 Chevrolet. The size of a tire in the rear floor seven weeks ago, it spread to fill the entire vehicle. Four satellite nests around it have gotten into the eaves of the barn the car is parked in.
Posted by Jen Jordan at 11:35 PM