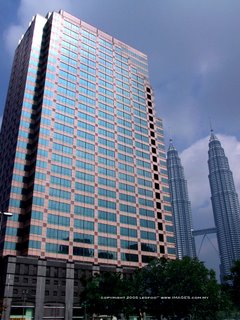 "Thanks in large part to this summer’s record high oil and gasoline prices, Exxon Mobil posted a quarterly profit of $10.49 billion - the second highest quarterly profit for a publicly traded American company ever.

Exxon Mobil’s third quarter runs from July through September, during which time oil prices began to slide off of record highs. Had oil stayed relatively stagnant or declined at a slower pace, this past quarter most certainly would have been the most profitable quarter on record.

And who has the highest quarterly profit ever?

That would also be Exxon Mobil, who posted a quarterly profit of $10.71 billion during the fourth quarter of 2005.

According to an article posted on Yahoo! Finance, Exxon Mobil’s third quarter revenue of $99.59 billion is greater than the annual gross domestic product (GDP) of both the United Arab Emirates ($98.1 billion) and Kuwait ($52.76 billion)."

Remember this comment from Mr. Stuart McGill, Senior Vice President of Exxon Mobil, the world's largest publicly traded oil company: "'Realistically, it is simply not feasible in any time period relevant to our discussion today. Americans depend upon [oil] imports to fill the gap. No combination of conservation measures, alternative energy sources and technological advances could realistically and economically provide a way to completely replace those imports in the short or medium term. [...] end[ing] foreign oil imports is not only a bad idea, but also impossible."
Posted by Jen Jordan at 9:05 AM

The profit that Exxon made is almost equal to the gross national earnings of Iceland. so a whole county could support itself on Exxon's greed. Also, the share holders are making more in dividends than Exxon is spending on exploration.