Have Penis, Will Go Crazy

Jakub Fik, 33, went on a rampage on Chicago's northwest side Wednesday morning. When confronted by police, Fik hurled several knives and his severed penis at the officers. Stunned officers stunned him with a Taser and took him into custody.

"We took him out without any serious injury, with the exception of his own," said Chicago Police Sgt. Edward Dolan of the 16th District.

Doctors at Northwestern Memorial Hospital reattached Fik's penis and he was listed in good condition.

For Dianne, the story I'd told her about in awed and repulsed voice:

Thomas Hendry, a former Christchurch student, was strapped for cash seven years ago. So he dediced to do what no one else in the whole world of people would do. For doing this feat of grossness and stupidity, Handry is inlcued in the Darwin Awards book. Most would be offended. Not Hendry.

"I'm tickled pink, actually," said Hendry, now 29 and running a gothic nightclub in central Melbourne, Australia. "I am still genuinely surprised at the stir it did create. I didn't think it was that big a deal at the time."

In 1999, as a cash-strapped, 23-year-old computer trainee came up with a frankly stupid and patently freaky 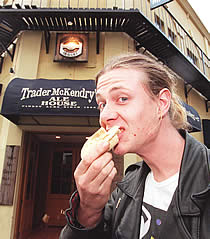 idea to outdo his rivals at the "How Far Will You Go?" promotion at Trader McKendry's Tavern in central Christchurch.

Hendry stapled his penis to a crucifix, poured cigarette lighter fluid over it, and set it ablaze before a stunned crowd, including his mother.

He went to a free students' medical centre the next day and had his burnt and bruised member dressed.

The macabre act made headlines in The Press, the police stepped in and the pub lost its licence for a week over Christmas.

Television New Zealand was hauled before the Broadcasting Standards Authority after the Mikey Havoc show screened a rerun of the event.

Hendry spent the prize money on his car, registering his bloodhound cross, Puss, and a one- way ticket to Australia.Speaking from Melbourne, where he now lives with Puss, Hendry's only regret was that he did not get live footage of his winning act or even decent photographs.

He had been inspired by an earlier contestant who pierced his penis foreskin with a safety pin.

"I thought I could do better than that."

Fortifying himself with a bottle of wine, Hendry took a white pine crucifix and, with an industrial stapler, pumped 18 staples into his scrotum and foreskin.

Hendry earned a total $2600 for his efforts, including royalties from the re-enactment and photos.

But was the notoriety worth the pain?

"Absolutely. It's a fun story to have up your sleeve," Hendry said. "I usually keep quiet about it at work when I've got a new job. But eventually something leaks out or I might let slip to someone, accidentally on purpose, just for fun. It's not something I have dropped into any dinner conversations with girlfriends' parents or anything like that. You have to pick your moment for sure."

As for the wooden crucifix used in his act, it is still getting him into strife.

On a visit to Christchurch last April he retrieved it from his mother's wardrobe (ick!). But on his return trip Melbourne custom officers found traces of borer (an icky insect), and refused to let the crucifix into the country.

"It cost me $30 ($NZ33) to fumigate it and then they released it a month later and now it is sitting in my lounge on the sideboard.

"I'll chuck it up on (internet auction site) eBay one day."

That has got to be the penis story to end all penis stories!
Posted by Jen Jordan at 11:34 AM

my friend is dating and pregnant by this idiot