Is this what my ancestors ate? 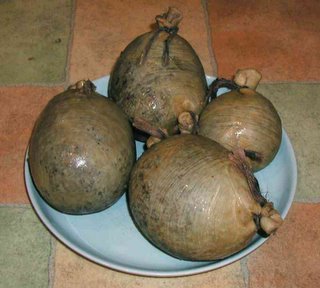 Check the Haggis Cams to see if you can spot the little blighters.

Here are Ten Things You Never Knew About Haggis

The World Haggis Hurling Championships have taken off again backed by McKean Foods - the official sponsors of this long overdue event.

Haggis Hurling dates back to early Scottish Clan Gatherings, where the women folk would toss a haggis across a stream to their husbands, who would catch the haggis in their kilts. Why they did this is anyone's guess. 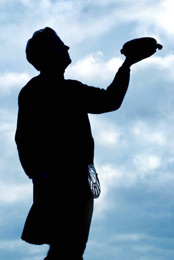 "The fact that I am not a haggis addict is probably due to my having read Shakespeare. It is the same with many Englishmen. There is no doubt that Shakespeare has rather put us off the stuff.... You remember the passage to which I refer? Macbeth happens upon the three witches while they are preparing the evening meal. They are dropping things into the cauldron and chanting "Eye of newt and toe of frog, wool of bat and tongue of dog," and so on, and he immediately recognises the recipe. "How now, you secret, black and midnight haggis," he cries shuddering.

This has caused misunderstandings and has done an injustice to haggis. Grim as it is, it is not as bad as that-- or should not be. What the dish really consists of -- or should consist of -- is the more intimate parts of a sheep chopped up fine and blended with salt, pepper, nutmeg, onions, oatmeal, and beef suet. But it seems to me that there is a grave danger of the cook going all whimsey and deciding not to stop there. When you reflect that the haggis is served up with a sort of mackintosh round it, concealing its contents, you will readily see that the temptation to play a practical joke on the boys must be almost irresistible. Scotsmen have their merry moods, like all of us, and the thought must occasionally cross the cook's mind that it would be no end of a lark to shove in a lot of newts and frogs and bats and dogs and then stand in the doorway watching the poor simps wade into them....

An odd thing--ironical, you might say-- in connection with haggis is that it is not Scottish. In an old cook book, published 1653, it is specifically mentioned as an English dish called haggas or haggus, while France claims it as her mince (hachis) going about under an alias. It would be rather amusing if it turned out that Burns was really a couple of Irish boys named Pat and Mike." 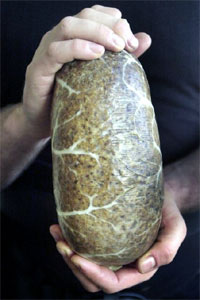 There is no such thing as a vegetarian haggis. It's well known that they are carnivores, feeding mostly on small insects, voles and the occasional unfortunate bird. Indeed, a rare report tells of the time a herd of haggis descended on a lone hunter who, having partaken rather too much uisge beatha, had lain down under a scots pine for a snooze. Only his kilted skeleton was left - they even ate his sporran (although some say the haggis took it away with them, thinking it one of their own).

And it's not that different from the German Saumagen, made from pigs. And without the Whisky.

My Puerto Rican used to love to eat bull testicles. They sort of look somewhat like the haggis...only smaller. It brought a tear to my eye. Then I remembered how the kitchen would smell like piss when he boiled the goddamn things. then I stopped crying.