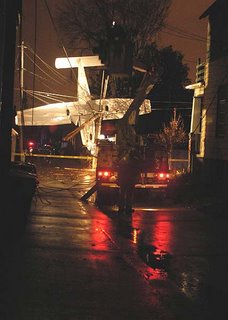 The day had been unseasonably warm. The clouds that had promised rain all day broke in the late afternoon, pelting the ground and making life a little difficult for distracted drivers*. But in a matter of seconds, life at Humboldt and Weil in Milwaukee, Wisconsin would get a little scary and a lot chaotic.

"There was a loud boom and my husband went running outside and said, 'There is a plane down!"

Lucy Sanchez, 62, heard the crash from her living room just across the street from the crash site. "It's crazy. I have never seen anything like that happen in my life."

The plane was suspended, nose down, just 3 feet from the ground, apparently propped up by a broken utility pole and power lines, with pilot David J. Betts, 37, of Elkhorn trapped inside. As you may have guessed, it knocked out power for the entire neighborhood.

Sanchez's husband ran to the dangling plane and asked the pilot if he was OK. The pilot was indeed OK.

Betts' plane had been approaching an airstrip at Timmerman Airport. He'd circled several times without landing during the heavy downpour and finally headed east before dropping off the radar at 6:15 p.m. said Anne E. Schwartz, Milwaukee Police Department spokeswoman.

Betts and his 1979 Piper Archer-II PA-28 hung from the wires for nearly two hours, as firefighters and WE Energies workers secured the plane and clear downed power lines. After manuvering two firetrucks just so to secure and stabilize the plane, firefighters were finally able to remove Betts from the cockpit.

He was taken to Froedtert Memorial Lutheran Hospital in Wauwatosa, where he was being treated for minor injuries.

An investigation is underway to determine of Betts was drunk or if he was disoriented by the storm and the vast black water of Lake Michigan.

I heard about this advertising scheme on a another blog, that gives away free Apple ipods. It sounded like a scam, but after I googled it, it was legitmiate. You have to sign up for an offer from one the sponser companies. I did a free trial one. This is for the new 60GB video ipod! Here's the link, check it out.
Video Ipod

His "minor" injuries were having his ear ripped off