"The state of Connecticut must not have enough to think about," said Gary A. Lippincott, a Massachusetts artist responsible for the image on a British import beer called Seriously Bad Elf.

"The funny thing is that it is really tame compared to what they originally wanted. I believe the original idea started with him roasting a reindeer on a spit. I wonder how that would have gone over." 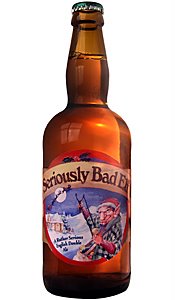 A constitutional battle is brewing over a the beer that Connecticut state officials are trying to ban because they say its label might entice children to drink. State liquor regulations bar alcohol advertising with images that might appeal to children. The regulations specifically mention Santa.

"There are certain symbols and images that appeal more strongly to children and this regulation includes the most obvious among them," Attorney General Richard Blumenthal said. "The state has wide discretion to regulate the sales of alcohol."

The state Liquor Control Division notified Massachusetts-based Shelton Brothers distributors that it was rejecting its application to sell the beer, a bitter winter ale brewed at the Ridgeway Brewery in England. 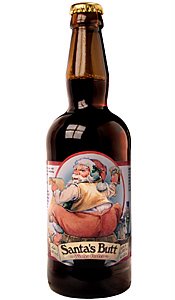 "We even had a beer called Santa's Butt last year," Shelton said. "They didn't notice Santa's Butt, but they notice this one. How can you miss that big red thing? Minors are not going to be looking to buy beer because Santa Claus is on the label."

Shelton has enlisted the help of the American Civil Liberties Union of Connecticut and demanded a hearing before the Liquor Control Commission. At a hearing last week, ACLU attorney Annette Lamoreaux argued that the regulation has serious constitutional flaws.

Not only does it violate Shelton's free speech rights, she said, but protecting Santa Claus is a violation of the Constitution's establishment clause, which prohibits government endorsement or disapproval of religion.

She also cited a decision in another beer-label case, Bad Frog vs. New York. A court ruled that the potential for an image to attract a child is not reason enough to ban it from a beer bottle because there are already laws against selling beer to children.

Not only that, Shelton said, but you can hardly make out Santa in his sleigh on the beer label.
The state has also indicated that it will not allow Shelton Brothers to sell Warm Welcome Nut Brown Ale, which also has a picture of Santa Claus on the label.

Lippincott, who has illustrated children's books, said he was not thinking of kids when he drew the seriously bad elf. He said many small breweries try to stand out by making their labels humorous or interesting.

"This kind of advertising has great appeal to young people, but the line where the states and the government can restrict that speech is very squishy," Hacker said. Squishy law, beer and children. Very American.

Lamoreaux said she's confident the Constitution is on Shelton's side, and they would win any court battle. But she said they are not looking for the state to revamp its liquor regulations.