It is Friday night. While others are buzzing about downtown, I sit in front of my computer screen, music playing in the background, incense burning next to me and scads of coffee filling an oversized mug. Believe me, it's better this way. You don't want to be around me if the muse is denied.

As the music blasts (Snow Patrol, Talk Talk, Faultline, Black Rebel Motorcycle Club), I remember an article on music and writing I did a while back for Deadly Pleasures that now has a happy home at the Mystery One Bookstore site.

One can't help but notice how much music has pervaded fiction, in particular crime fiction. There are books I can't even imagine without the part that music plays.

But for my purposes this evening, I'll harken back to the element it plays in the creative process. For it seems once again I find myself abnormal - music is an essential part of the writing process for me. It establishes mood and actually helps me to focus my scattered brain on the task at hand - thank you AD/HD. But for most, music, lyrics really, are a distraction.

In my alliteratively annoying fashion, I asked a few writers about this very subject and got a variety of answers:

What do these paragons of paradoxes listen to while they write? Does it affect what they’re writing? Let’s return to Scotland and the world of Rebus (Ian Rankin - or, as if one goes by his signature, Ice Rack).

“I listen to instrumental music mostly: lyrics can get in the way. But it has to be rockist, so I go for bands like Mogwai, Godspeed You Black Emperor, Dirty Three, etc. No classical; sometimes a little laidback sax jazz. I don't feel the need to listen to different types of music for different scenes - which is to say, I won't suddenly switch to Jesus and Mary Chain because it's a car chase, or Autechre when it's a laze on the sofa...” So not Rebus. It’s rather a relief.

George Pelecanos pontificates in a similar vein. “I can't listen to music with vocals while I write because the words collide with the words running through my head. So I listen to instrumental music: electric jazz (70's Miles and Mahavishnu), acid jazz, trip-hop (or whatever they're calling it this week), and movie soundtracks. The music of Ennio Morricone has been in heavy rotation in my computer these past three years while I was writing the Strange/Quinn trilogy, because those books are urban westerns, and because his music is beautiful. I felt it helped me pace the scenes. Also, I was plain into it. Bullitt/Dirty Harry-era Lalo Schifrin was another favorite.” When I plugged some Ennio in I felt strangely compelled to don spurs and roll my own cigarettes despite the fact that I don’t smoke. I closed my eyes and tried to picture D.C. and couldn’t. My respect for Pelecanos increases.

“In terms of the ACTUAL writing, I don't listen to music at all.” Mark Billingham responds “I find it far too easy to sing along and drum on the desk when I should be typing. I listen to music all the time when I'm not actually working, through the course of a novel and that does change book to book. When I'm stuck into a story I listen to far less seventies stuff than I would normally - immersing myself far more in country and alt. country music. Always on the lookout for something new for Thorne to discover. Right now I'm going through a major Steve Earle phase having just read a wonderful biography and so Thorne is likely to be listening to "Guitar Town" and "El Corazon" quite a lot in the book to come...” Earle’s short stories and music ride the edge that many mystery protagonists spend their fictional lives on, and that’s probably why Pelecanos’s Quinn finds shelter in Earle’s blue collar world. In a surreal twist, Earle himself has released a collection of short stories “Dog House Roses” trying to use his lyric writing skills to tell a story without a melody. Paradox? Maybe? Or just an extension of his writing ability.

John Connolly concurs with the no music while actually writing rule. “I don't actually listen to music when I write. I just find it too distracting. I used to have a stereo in my office, but I got rid of it. It just made the place look cluttered.” Can’t have a cluttered office when writing about spiders, can we? But, again, music plays an important role. “Music has been inspirational, though. When I'm thinking about a book - maybe when I'm walking or driving - I sometimes use music to help me concentrate. When I despaired of ever finishing Every Dead Thing - which was often, as it took five years - I would listen to “Something I Can Never Have” by Nine Inch Nails. It's a supremely sinister piece of music, and effectively soundtracks that book. Similarly, I always associate Depeche Mode's “Home” with Dark Hollow. That was the song I listened to when I ran into trouble with it, or just needed to get in the mood to write. Parts of the Sweet Hereafter soundtrack have also helped, at times, particularly the second track.”

Bill Fitzhugh is in accord with silence. “I never listen to music while actually writing. I have a dilapidated building on the back of my property that I call The Way Back. I've got my album and cd collection back there with my seventies-era Klipsch Heresy speakers, turntables, cd players, mixing board, etc. I go back there a few nights a week to drink whiskey, smoke a cigar, and listen to music while I think about the current book, make notes on it. Figure out what has to happen next. But I don't do any writing out there. Right now, working on Radio Activity (which is set in a 'classic rock' radio station), I'm listening to all the great stuff from '67 to '77 that classic rock radio stations never play.” I think if Rankin ever entered the Way Back with Fitzhugh, we wouldn’t see either of them for months.

“I never turn down blues or any music with good harmonica,” Vicki Hendricks notes. “It's the dark side of life that appeals to me, as it does in my writing, I guess. On the writing of the current novel in progress Cruel Poetry, I've listened to Santana's Supernatural over and over for hours and hours. Sometimes I set the CD player to repeat “Smooth” and never change it, because it has just the attitude I want. One of the characters in the novel has Cuban parents, but was born in New Jersey. I can't remember if I created the character before or after I started listening to the Santana CD, so now it's all inseparable, and the Latin flavor in the form of dialogue permeates the manuscript, as well as the obsessive plea for love to someone who is so “smooth“.”

You'll have to tune into the Mystery One site to find out the answers to the next question: Were you ever a musician. Connolly's answer is a must read. 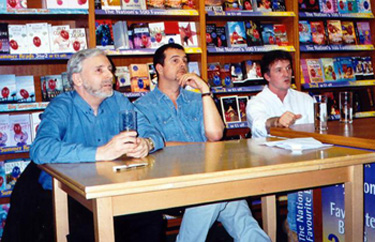