Because You Didn't Ask

You: What's the most expensive cheese in the world?

Me: Probably the Italian maggot cheese. You can tell it's still good if the maggots aren't dead. 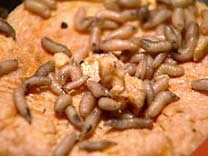 Casu Marzu (Sardinian for "rotton cheese") or maggot cheese is actually a round of pecorino cheese filled with thousands of squirming maggots. Apparently the little lovelies give this delicacy a spicy, creamy flavor after having eaten and excreted the cheese a few times. The digestion process radically increases the process of fermentation of said cheese, reducing fats and making some parts liquid. This liquid maggot cheese is referred to as "lagrima".

The best taste is supposed to arise when a maggot is pressed against the roof of the mouth (still squirming, of course) and squished to release the cheese inside.

Yaroslav Trofimov, writing in The Wall Street Journal in 2000, described the cheese as "a viscous, pungent goo that burns the tongue and can affect other parts of the body."

This rather smelly cheese is illegal and you'll not find it sold anywhere. Nevertheless, locals still “make” this cheese in their kitchens at home with sheeps milk left out 'til the flies come home to roost.

The flies most likely to lay eggs are called, crazily, cheese flies. They are members of Piophilidae family of flies whose best-known member is Piophila casei. It's a small fly, about four mm (1/6 inch) long. The fly's larva infests cured meats, smoked fish, cheeses, and decaying animals. The larvae are about eight mm (1/3 inch) long and are referred to as cheese skippers for their leaping ability. When disturbed, this tiny maggot can hop up to 15 cm (six inches) into the air.

If one chooses to consume this treasure of frommage, there does exists a risk of enteric myiasis: intestinal larval infection. Piophila casei larvae have been known to pass through the stomach alive (human stomach acids don't usually kill the little buggers) and hang out in the intestines. Once there, they can cause serious lesions as they attempt to bore through the intestinal walls. Symptoms include nausea, vomiting, pain in the abdomen, and bloody diarrhea.

That is just what I need to read bright and early on a Monday morning. Shudder-ific