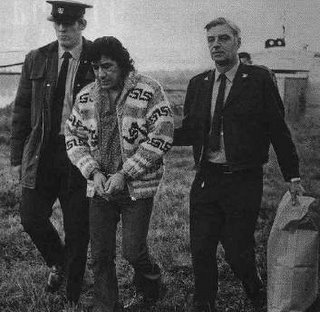 "Leonard Peltier...three decades of freedom denied. Thirty years ago today—February 6, 1976—the Canadian government arrested Leonard Peltier...later extraditing him to the U.S. for trial (sic). Some Peltier FAQ. Another informative site. How the other side sees it. Peltier and the American Indian Movement (AIM). Sign the online petition. As Dylan sang about Hurricane: "To see him obviously framed couldn't help but make me feel ashamed to live in a land where justice is a game.""


Leonard Peltier, a citizen of the Anishinabe and Lakota Nations, is a father, a grandfather, an artist, a writer, and an Indigenous rights activist. He has spent nearly twenty-six years in prison for a crime he did not commit. Amnesty International considers him a "political prisoner" who should be "immediately and unconditionally released."

A Chippewa, Ojibwae and Sioux, from Turtle Mountain North Dakota, he is widely known to be a kind and generous man. On April 18, 1977, Peltier was convicted for first-degree murder of agents Jack Coler and Ron Williams, at the shoot-out in Oglala. He had been extradited from Vancouver, Canada in 1976.

Peltier was on the run, and had been discovered and arrested in Alberta. His extradition was made possible by the testimony of Myrtle Poor Bear, a Lakota woman who claimed that she was his girlfriend, and had witnessed him shooting the 2 agents. Later Myrtle came out and stated that the FBI had threatened to kill her and her child, if she didn’t sign what totaled to be 3 affidavits. She had never even met Leonard before. Agents had told her "they could get away with killing her because they were agents." They also showed her photos of the severed hands of Anna Mae Aquash, telling her they would "put her through a meat grinder", and nobody would ever know.

"Evidence of a slippery slope continued: Newsweek reports that White House counsel Steve Bradbury believes President Bush can order killings on US soil as part of the Terrorist-Surveillance ProgramTM. Meanwhile, while Attorney General Gonzales "lashes out" at the media and insists that the TSPTM is "not a dragnet that sucks in all conversation and uses computer searches to pick out calls of interest," the Washington Post reports it's precisely that -- "computer-controlled systems collect and sift basic information about hundreds of thousands of faxes, e-mails and telephone calls into and out of the United States before selecting the ones for scrutiny by human eyes and ears" -- and has led to very few leads. (See also discussion of Arlen Specter and the legality of the TSPTM here.)"
Posted by Jen Jordan at 4:02 PM

I really thought it was going to happen with all the pardons before Clinton left office.