Someone's Gotta Do It 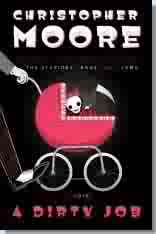 Christopher Moore is a hero of mine; a guru, an avatar, and many other words that mean the same thing that I could look up in the thesaurus except that I have already no doubt overstated my point.

All of this has been re-iterated for me by his soon to be released, A DIRTY JOB.

Brutal honesty forces me to tell you that I adored LAMB to the point of buying multiple copies to thrust on loved ones and I actually re-read it. Twice. This is a rarity for a women verily drowning in unread books many of which I am actually looking forward to.

Moore did write a few tomes after LAMB.

THE STUPIDEST ANGEL was an ok read.

A DIRTY JOB is fucking brilliant.

Oh, sweet review gods, you have put a book in my paws I will have to karmically read at least ten crappy books to make up for.

This is not overstatement. I may well have been grinning for the whole read. I think I was. My face hurts and the cats are looking at me strangely.

I'll admit, there was trepidation upon picking it up.

When you read something fantastic by an author, absorb their entire backlog like Tantalus finally able to reach water after eons of dehydrated torment, then read a rather good than an ok book, you become a little book shy. Just a tiny bit. As in, you know you’ll by the book, but you’ll sigh heavily and raise a brow (if you’re able to – or, if you’re like me, you end up with a surprised look in place of the skeptical one) before you plunk down your money.

What’s it all about, babble mistress, you may well be asking.

Well, I’ll tell you a little. Just give you a taste.

The day Charlie Asher, beta male*, is given one of the greatest gifts a man can be given in the form of a daughter, a gift he already had, loved and cherished was taken from him. His wife, Rachel.

Charlie had rushed back to the hospital with a favorite cd after his very patient wife had gently kicked him out after he had effectively driven her and the nursing staff insane with his incessant worrying. Worrying being an understatement.

Charlie is met by the sight of a very tall black man in a mint green suit upon reaching Rachel’s room.

“What are you doing here?”

It is right then that trouble begins. Or should I say, TROUBLE. No, I shouldn’t. Let’s stick with trouble.

Charlie’s wife had died and this man in mint green must have had something to do with it. When Charlie turns to confront him, the man is gone. As is the CD.

The bereaved, confused and anxiety riddled new Dad is left to raise his little girl in a world filled to the brim with sharp corners. He learns to raise her as he runs a second hand thrift store left to him after the death of his father. A store staffed by Ray, an ex-cop in desperate need of a date and a faster internet connection nudge-nudge, wink wink and Lily, a perpetually annoyed Goth sixteen going on seventeen year-old girl-woman who has just discovered Baudelaire.

A store that seems to be stocked with objects possessing a menacing red glow.

Oh, and people seem to be dying wherever Charlie goes.

Too bad he was out of the store when a delivery came for him. In the envelope, the Great Big Book of Death. It would have explained everything. If Charlie had been able to read it. Before Lily signed for it and made off with it. With no intention of giving it back.

Left to his own devices, Charlie pieces together that something weird is happening to him. Something that makes people occasionally drop dead at his feet and has voices calling to him from the sewer with a cute nickname; Fresh Meat.

With this strange gift/curse, Charlie has been delivered of one piece of luck. His daughter, Sophie. Who has a growing collection of formerly living pets in need of constant replacement. A father’s love for his daughter gives a grieving man a reason to live as he comes to terms with the possibility, that just maybe, he might, perhaps, be Death.

This book was so good, so funny and so moving that I am actually pissed that I’m done reading it. Moore has returned to the heights of tight, humorous, profound, allegorical writing he gave us with LAMB. And if you’ve faced the loss of people you love, it’s all the better. He touches on death and dying as one who has grieved and yet returned to the land of the laughing.

A kow tow to the mad man in Hawaii from a grateful grasshopper.

*and this is important.
Posted by Jen Jordan at 9:08 PM