"This is the most tacky, tasteless, smutty, down-in-the-gutter tour ever created," Jane Tollini robustly reported to the pack of people (adults only) who piled onto two trams. They spent a little over three hours hearing tales of animal fetishes and gay penguins.

Tollini began with penises and moved deftly on to vaginas, including ones "so large you could lose your family and your SUV in them," and to cloacas or "multipurpose holes" useful for urination, defecation, egg-laying and sex. 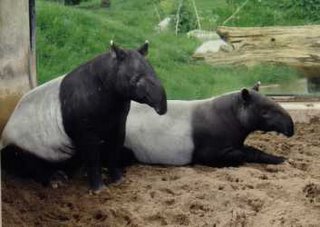 Apparently the tapirs are among the zoo's most well-endowed residents. Jack the Tapir once injured by stepping on his.... self.

"We soaked it in a tub of betadine for a couple of weeks," Tollini said. "It turned purple, then black, then it atrophied. Then it fell off, and he ate it."
Posted by Jen Jordan at 10:59 AM

It turned purple..fell off and he WHAT?

Sweet Jesus, where on the evolutionary improvement scale does THAT get you?

When I heard Lenny Bruce talk about steeping on his dick I assumed he was talking about his act not going over well. Now, I know.

I did not know that ostriches could be hermaphrodites although I was always under the impression that Big Bird was a hermaphrodite. They did not go into detail on the animal bondage. I would like to know how they go about this. Is it some sort of ape that learned to tie nots or use handcuffs?