Someone Will Set the Spark Off 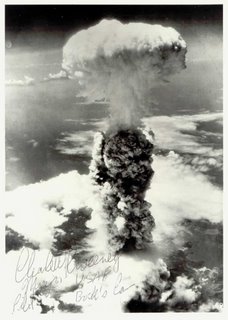 And we will all be blown away.

How close we are to that is up for serious debate. One view point, from Dr. Jeffrey Lewis on his blog ArmsControlNetwork, is that we are a little less than a decade away if that end is to come at the nuclear behest of Iran.

"Overall, Iran is probably a little less than a decade away from developing a nuclear weapon. The key question here is how long it will take Iran to enrich a few tens of kilograms of uranium to more than 90 percent U-235.

Dafna Linzer reported that the US Intelligence Community does not believe that Iran could do so before “early to mid next decade, —a revision of previous assessments that Iran would have the ability to produce nuclear weapons early in the next decade.

Why so long? The answer is that Iran still has to build, install and operate its centrifuges to enrich uranium. "

Dr. Lewis then goes into an in depth analysis that hurt my brain after a bit. I had to rest and then go back and read more. But this is certainly a different take than the imminent demise indicated by some and makes more sense than mere prognostications of doom.

His article on "Where Would Jesus Look for WMD?" is also quite the synapse popper.


The Kingston Trio is still utterly current with the lyrics from the Merry Minuet:

They're rioting in Africa,
They're starving in Spain.
There's hurricanes in Florida,
And Texas needs rain
The whole world is festering
With unhappy souls.
The French hate the Germans,
The Germans hate the Poles;
Italians hate Yugoslavs,
South Africans hate the Dutch,
And I don't like anybody very much!

But we can be tranquil
and thankful and proud,
For man's been endowed
With a mushroom-shaped cloud.
And we know for certain
That some lovely day
Someone will set the spark off,
And we will all be blown away!

They're rioting in Africa,
There's strife in Iran.
What nature doesn't do to us
Will be done by our fellow man
Posted by Jen Jordan at 1:03 AM