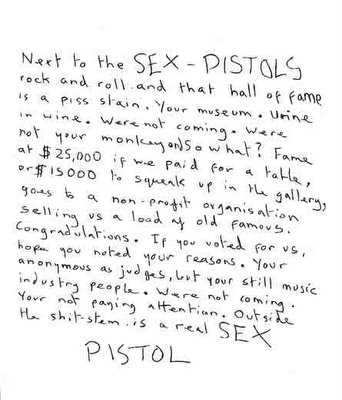 The Sex Pistols, glorified idiots and talentless hacks, have opted out of appearing at their induction into the Rock and Roll Hall of Fame.

The group officially declined the honor -- to be handed out in front of a group of their misguided, money-driven peers, March 13 at a dinner and "performance" at the Waldorf Astoria in New York -- in a lovely handwritten message posted on the band's Web site Friday.

And fuck if I don't agree with them.
Posted by Jen Jordan at 1:49 PM

This, to me, is the most legitimate thing they've ever done.

I am filled with very unexpected respect.

I could dig that.

If they weren't such whores.

I don't know what rock n roll chromosome I'm missing, but I've never been the least bit impressed with the Sex Pistols. They were and are every bit as pre-fab as the Monkees.

I rest my nuts on John Lydon's head and he sits there like a good little toady.

"Thank yah, guv'nah. Iss uh honor to serve as a ress for ye bollocks, it is."

That having been said, to hell with the friggin' hall of fame, even if they are giving props to Sabbath finally.

To me, the real bands were the Clash, Patti Smith, Lou Reed, The Stooges, et al.

The Sex Pistols were a creation, an marketing gimmick, and nothing more.

But I really do like the middle finger extended at the 'music industry.'

Of course, they were a marketing gimmick...Lydon has acknowledged that time and time again. But still, this gesture is a wonderful fuck you to the music industry.