When Destroying Art is an Art Form 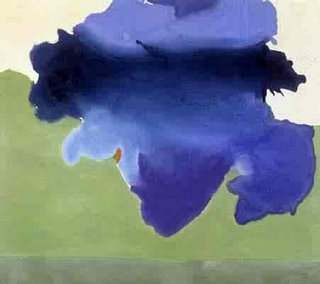 Detroit Institute of Arts officials said a charming 12-year-old boy was with a group from Holly Academy in Oakland County, Mich., when he took a wad of gum out of his mouth and stuck it on Helen Frankenthaler's 1963 abstract painting "The Bay," worth about $1.5 million.

Although the gum didn't stick to the fiber of the canvas, it left a stain the size of a quarter. T Museum experts are busily researching chemicals in the gum to decide how best to clean the painting.

Holly Academy director Julie Kildee said the boy was suspended from the charter school and that his parents also have disciplined him."Even though we give very strict guidelines on proper behavior and we hold students to high standards, he is only 12 and I don't think he understood the ramifications of what he did before it happened, but he certainly understands the severity of it now."

In other art news, the glorious Santiago Calatrava addition to the Milwaukee Art Museum stands out as a classic thing of beauty in a city known for cheeseheads and beer. 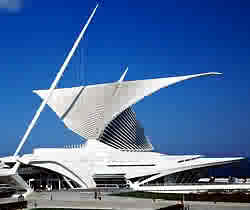 But a recent martini fete shows how the spirit of the city holds true despite whatever trappings are built to house them. The Martinifest degenerated into an overcrowded, drunken affair. Some guests accosted artworks, threw up, passed out, were injured, got into 'altercations' and climbed onto sculptures.

"Hindsight is 20-20 . . . it was probably too cheap," Kerry Wolfe, a local programming director for Clear Channel, said of the event's premise - unlimited martinis for $30.

"In our five years of experience, we have never had any problems with rental events," David Gordon, the museum's director, said in a brief written statement responding to questions about the event. "It was not an appropriate event to be held in the museum, and we have reviewed our procedures for bookings."

As per usual, sculptures lining one of the long gallerias in the museum's Calatrava-designed building were in close proximity to serving area. But on this occasion, food, drink and vomit decorated some of the artworks by night's end.

"It was crazy," said attendee Kathleen Christians, 39. "People were shoving people over. People were getting sick, screaming, shouting, messing with the artwork."

"They were standing on it, grabbing the boobs, and somebody was just taking pictures with a cell phone," said Laura Collins, 35.

Asked whether artworks had been damaged or are in need of cleaning, the museum said two sculptures had been removed for "review" and more would be known in two weeks, after the senior conservator returns to the museum and has had a look. The sculptures are made from resilient materials such as bronze.

During the night, several vendors ran out of food, drink mix and vodka early on. A bad sign. Some who ran out of mix started pouring straight shots of vodka. It is not known if beer bongs were used.

Insurance is expected to cover all damage.
Posted by Jen Jordan at 3:59 PM