"That's when the idea came to us to just sell them" 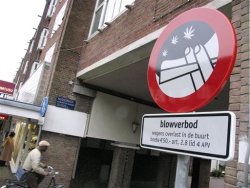 The City of Amsterdam had a problem and came up with a solution.

An experimental ban on smoking marijuana on the street in De Baarsjes meet with approval, of a sort.

"On Wednesday we placed the first sign, and it was gone the next morning," said Wim de Graaf. "We put up a new one Thursday, and it was taken the same night as well. That's when the idea came to us to just sell them."

From a desire to reduce loitering and petty crime came a small windfall.

"We're selling them at not much more than they cost, so we expect profits will be modest," De Graaf said. But he added that the city has already had many requests for the signs, some from outside the city. The signs can be ordered via De Baarsje's Web site. "Now everyone can have his own 'no toking' sign simply by ordering them through the city."

Note that marijuana is technically illegal in the Netherlands. People who smoke marijuana outside in De Baarsjes risk a euro50 (US$60) fine. But most travelers know that small amounts can be bought and smoked in "coffee shops."

I used to live in a building with a few resident tokers. The second-hand half-high gave me migraines, and I reserve the right to pay for my own high. And then sue them for the addiction.

My brain doesn't need drugs to mess with me I woke up this morning with "We go together" from Grease, doing a medoly with the theme song from Facts of Life. It's something like this "We go together boogidy boogidy boogidy...the facts of life the facts of life. And there is this involentary video thing with John Travolta Olivia Newton John Tudy and George Clooney dancing and singing. I want it to stop

OK now I asked for help with this problem with my brain and I have "Help my obe one help me" and the princess is now in the video too. Coffee isn't helping. I want it to stop