"Any damage caused by graffiti or indecent rubbing will be prosecuted." 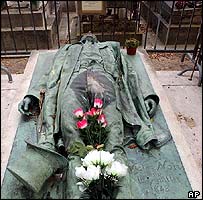 Officials wintess to years of damage to the icon of a 19th Century journalist known as Victor Noir's groin area have erected a fence around his grave in Le Cimetière du Père-Lachaise. Noir, real name Yvan Salman, was killed by Pierre Bonaparte, a great-nephew of the Emperor Napoleon, after bearing him a challenge to a duel.

Salman was due to be married the day after he was struck down. For some reason, this has engendered a reputation upon the effigy. A reputation for romance and fertility.

It is said, by those that say such things, that a woman who presses her lips upon that of the statue, slipping a flower into the upturned top hat, will find a husband by the end of the year.

Concern concerning the damage to the icon's groin area have thusly spawned the erection of the fence around the grave. And the sign prohibiting indecent rubbing.

Duly note that the statue depicts Noir in a frock coat and trousers lying upon his back, with a rather distinct enlargement in the groin.
Posted by Jen Jordan at 9:47 PM

Is there a decent way to rub a crotch in public? No. I'm serious. Those who have an answer, please rub my crotch.

Is there a way to receive this indecent rubbing that would not leave the receiver looking as though he wet his pants?

That, my friend, is the true question.

When she's are rubbed, it's generally not in that area.