Bog People Got Some Body 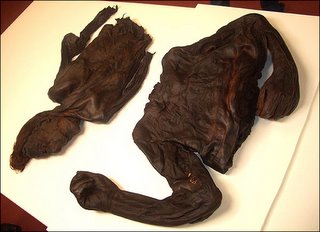 In what will no doubt end up being a continuing story, more Bog People have been recovered. The latest two in Clonycavan, near Dublin, Ireland.

Both of these bodies, dated from about 2300 years ago, indicate ritual sacrifice and beheading.

Based on his studies on these bog bodies and others, Ned Kelly, keeper of Irish antiquities at the National Museum of Ireland, has developed a new theory to explain why so many remains are buried on important political or royal boundaries.

"My belief is that these burials are offerings to the gods of fertility by kings to ensure a successful reign,"said Kelly.

"Bodies are placed in the borders immediately surrounding royal land or on tribal boundaries to ensure a good yield of corn and milk throughout the reign of the king."

My first post on the subject on July 2005 seems to be a mere benchmark of posted theories and stories concerning these tortured, boggy souls.
Posted by Jen Jordan at 1:14 PM