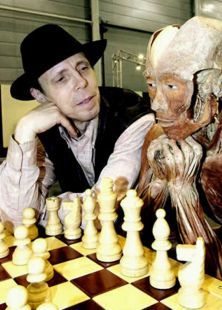 Gunther von Hagens knows how to keep his name in the news.

While BodyWorlds is still touring, von Hagens is also involved with a Channel 4 project that will teach viewers at home all they ever wanted to know about death without dying.

The four part series includeds anatomy for beginners and overviews autposies and pathology with Dr. John Lee. Armchair pathologists can even try their hand at cracking a case of their own.

The BBC gives a peek at the man behind the bodies.

Von Hagens is featured prominently in the Scotsman under the following headlines:

Check out von Hagens biography here. Here's the von Hagens Google image search. And a little site that features von Hagens and others inclined to seeing the human corpse as something beyond a buryable perishable.
Posted by Jen Jordan at 11:59 AM