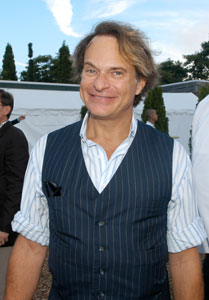 ...David Lee Roth is an asshat. This comes as no surprise to any that have noted the frighteningly affixed perma-grin and the maniacal lift to the right brow. And I'm not the only one with this opinion:

"This wasn’t the flamboyant Diamond Dave of his Van Halen days. What we heard (on Roth's first day as DJ) was an ego-deflated has-been rock star who came across like he was on a triple dose prescription of Lexapro."

Note that I was a huge fan of Van Halen when I was a kid.

The former lead singer of the band has not. A quote from the first linked article:

"This guy [Roth] is impossible to work with. A real arrogant, self-righteous ass," says a Lowdown spy. "All the execs know they made the two biggest errors in radio history - letting Stern go to Sirius and hiring this moron Roth. He never preps for a show. He is out the door five minutes after the show, unless he is 'forced' to record a commercial or re-record ones he made errors on."

This despite Roth's open letter written after getting the job:

"You have nothing to worry about with me, and things aren't going to change at all. I may not be the King of All Media, but I am the King of Allmusic. Take a look at that website and type in "David Lee Roth"--yeah that's right, I've influenced over ten different bands."

And personally, I think the likelihood of Roth getting back with Van Halen is as likely as me pulling a gold nugget out of my ass.
Posted by Jen Jordan at 12:45 PM

This, of course, begs the question:

What am I doing pulling things out of my ass?

The answer to that question and to other body cavity related queries tonight on NewWatch 6!

Actually, it sound like he has grown up and not in a good way. He's not the supercharged motormouth that was so entertaining in the days of Diamond Dave (and who apparently drove bandmates to distraction), but a tired old guy talking about how "his best days are behind him" according to the article. Sad.

Further comments regarding Jen's nether regions and things pulled therefrom will be reserved for future comments.

Yeah, Diamond Dave is now a dull rhinestone. With a penchant for redecorating. Who can pull weird things out of his ass.

"What am I doing pulling things out of my ass?"

I think the more important question is what you were doing stuffing them up there in the first place.

A bottom is like life: what you get out of it...

I have been listening to Howard Stern on Sirius and its just amazing stuff. Granted, I listened to him for 20+ years on terrestrial radio and thought he was great there but boy does the air get fresh when you can have the windows open.